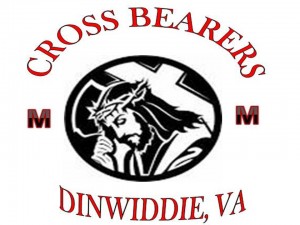 Luke 14:27 (KJV) And whosoever doth not bear his cross, and come after me, cannot be my disciple.

The Cross Bearers Motorcycle Ministry is a “Christ” directed ministry that began from the spiritual vision of Joseph T. Parham, the ministry founder. This “Vision” was birthed as a direct result of a motorcycle accident that occurred on September 3rd of 2013. There was a collision with a six point buck and the founder when he was out riding which resulted in the bike being totaled, the deer being killed and the rider sustaining only very minor injuries. This in itself was truly a wake up call as the Founder was at that time President of a Traditional MC and was riding to Georgia the very next day. For someone who had been riding motorcycles all of his life, it had never been as humble about the fact of how close to death or severe injury one can become in an instant while on 2 wheels. It could have very easily went the other way and GOD really could have called him home, but he didn’t. Through that realization it was felt that there must be other plans for this sinner to fulfill. Also, along with the realization of what the outcome could have been came the vision of what could be done to exemplify gratitude to the Creator. Hence, the Cross Bearers Motorcycle Ministry was born. The idea was bought forth to the pastor of the Olive Branch Baptist Church, the Reverend Kevin M. Northam, who embraced the idea of another Christ based ministry. After an extensive meeting with Pastor Northam on January 27, 2014 and after his aggressive scrutiny, he agreed to be the Spiritual Advisor and to allow Olive Branch Baptist Church to be the Cross Bearers home base. The first official meeting was held on February 1, 2014 and the ministry was officially dedicated on March 9, 2014 during the morning worship service at Olive Branch Baptist Church. The Cross Bearers Motorcycle Ministry is a Christ-directed, interdenominational, nonprofit, motorcycle ministry. We believe that GOD’s direction for this ministry is to endeavor to work diligently to promote the word and the goodness of GOD within our communities or throughout the world thereby being “Messengers for Christ”. Our motto that was formatted by our president, Minister Larry Watson and adopted by the ministry is, “For GOD We Ride, His Son by Our Side, The Holy Spirit as Our Guide”. Currently, we are excepting individuals who desire to help others and to spread the good news of Christ and the joy of Salvation. As was previously stated, we are a nondenominational organization that exercise a Christ based ministry from motorcycles. If interested, please contact the Founder, CB Joseph “Shogun” Parham at 2shogun@crossbearersmm.org, the President, CB Larry “Phu Watt” Watson at president@crossbearersmm.org or any Cross Bearer member. You may also inquire through the ministry’s email address at crossbearersmm@yahoo.com or at P.O. Box 803 Dinwiddie, VA 23841-9998. You may also leave a comment on this our website and we will contact you as soon as humanely possible.

"For GOD We Ride, His Son By Our Side, His Holy Spirit As Our Guide" Cross Bearers…ROLL OUT!!!